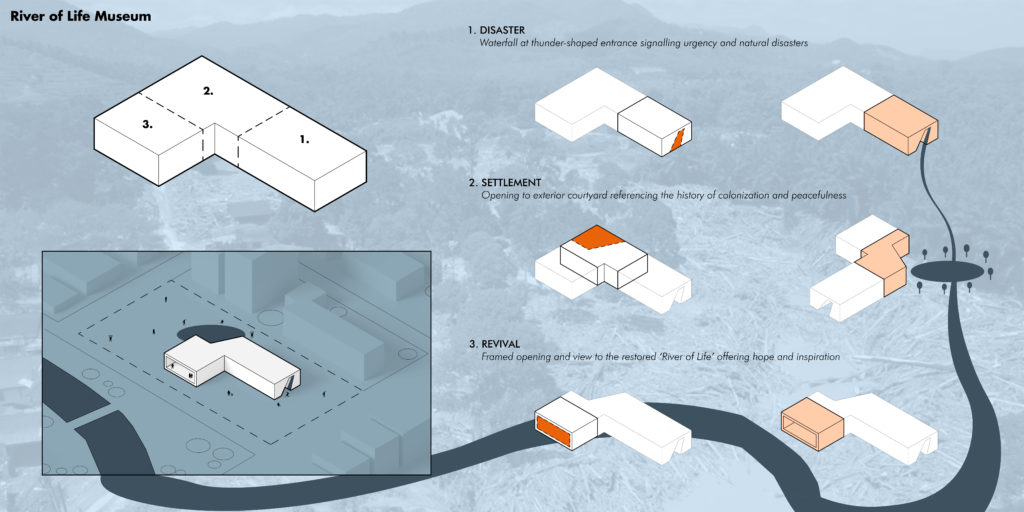 Just a month ago, in December 2021, Malaysia experienced its worst flood in history. Suffering an estimated loss of RM6.5 billion, lives were lost, families were separated, and cities were destroyed.

Reports showed that because of the development of urban areas and cities, damps and sewage systems are turned into high rise towers, illegal logging clogged the rivers, and litters all around the cities blocked the drainage, causing this unfortunate disaster.

I wanted to use this opportunity, to make a statement, to raise the awareness, and to tell the story of the rivers in Malaysia. This building is a museum about Malaysia rivers, showcasing artefacts and treasures, and telling the narrative of the streams. Although this is an imaginary site, I would like to imagine the river behind as ‘The River of Life’ in Kuala Lumpur. It was once a river deeply polluted but was restored by the community.

The building tells the narrative by dividing itself into three parts. The first part “disaster” shows the state and dangers of rivers now. The carved entrance takes the form of a lightning, symbolising natural disasters. Water flows down at a high speed from the steep side walls, suggesting urgency to act now.

As if going back into the past, as visitors go deeper into the museum, they see how rivers were once used for transportation, to get food, and shaped the community. Telling the story of "settlement", the museum opens to an exterior courtyard, for children to play, and parents to sit and enjoy.

Furthest into the museum, the third part "revival". Visitors could see the success story of the River of Life. How it was restored, and what benefits did it bring. They understand the urgency to make a change and how to act. Finally at the end of the museum, they are greeted by a full framed view of the spectacular, clean, and functioning river they love.

*The background shown is blocked Sungai Temelong, caused by illegal and uncontrolled logging around the area and was believed to be one of the main reasons that caused the flood.

I start by researching, sketching, and brainstorming ideas. I modelled the whole site in Sketchup to give a better imagination of it. After deciding on an idea, I roughly planned out the steps and layout by sketching. I then modelled the diagrams in Sketchup and exported them in 2D. I modified the line weights, add fills and additional details such as trees, people, and text in Adobe Illustrator. The clay render (or Styrofoam style in Lumion) is done using Vray for Sketchup. Finally, Adobe Photoshop is used for the background and some minor colour and brightness adjustments.