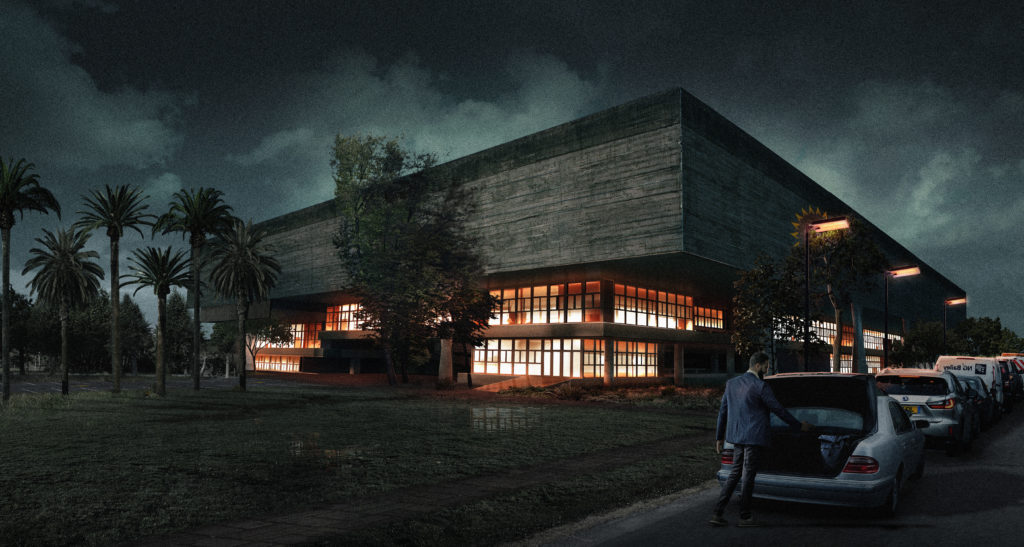 My process began with looking at photos online of the building I had chosen, in this case FAU USP. I then downloaded the relevant base model in SketchUp and adjusted the textures and lighting slightly before experimenting with various frames of the building. I settled on a wide contextual shot of the building and exporting that along with its render passes to photoshop using V-ray. When in photoshop I started by sketching out a plan for the narrative, lighting and colour palette before beginning the image. Photoshop was the main tool for creating this image, here I relit the render and matte painted in the surrounding context, sky, people, and objects. The image includes photo bashing alongside digital painting techniques over the top to give it a more concept art aesthetic.

The concept for the piece is representing the late-night study sessions that take place, especially at architecture schools, rather than strictly focusing on its role during the day. I used the night setting as an opportunity to bring in aquatic blue-green tones into the piece and compliment that with highly saturated orange tones to form a base complimentary colour palette, for the rest piece to work within. This would work especially well to compliment and reflect the atmosphere generated by the large variety of green infrastructure that surrounded the building. The image features mostly low saturated tones to emphasise moments in the image that are more highly saturated.