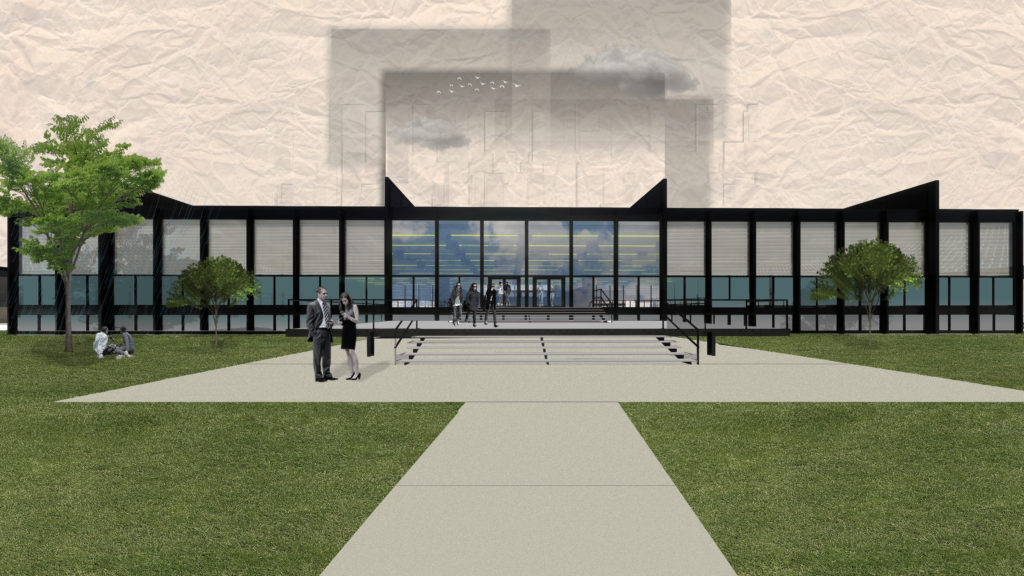 I used a combination of the following software along with my artistic capabilities:

Initially, I downloaded the SketchUp version 2015 model and then opened the model in Sketchup make 2017. I then studied the site and its context. I analyzed my own photos backfrom2019 when I visited. I also look at google’s aerial maps along with other site photos from Google. I collected those images which ultimately help me notice how the vegetation changes occasionally. I wanted to use this in my strategy to minimize the saturation of vegetation during post-production just because it is not too significant.

After my analysis and getting more familiar with the building, I rendered the Sketchup model in Enscape. Enscape allowed me to separate rendering materials but collected a few different views that helped one manipulate the drawing more during post-production. Those drawings exported from Enscape are called “realistic materials, material-ID, object-ID, and depth.” This allowed me to separate the many layers to create such a beautiful drawing quickly. Lastly, I played with materiality in Adobe Photoshop and tried to make the drawing realistic as possible. I first organized my base drawings at the bottom of my layers. I then went through several elements in order of hierarchy, considered the background first, then the foreground, and concluded with the building in between.

I added some steel texture that was given to us with the brief. However, I did not want the context or accessories to take away from the building so I used it to a minimum. I also made the sky rectilinear and cropped it to capture the building's essence. I added grass in a very subtle way. I then used noise and Gaussian blur along with lines to create the textured concrete path. I also lit up the indoor area and put in a few people just to show some activity, however turning down the saturation a bit. I then used windows and their material with a bit of reflectivity along with shadows where I felt were logical and realistic. That is most of the process that I can remember. Thank you guys for this opportunity. It really improved my skills for grad school.