This project was selected as a Finalist by the jury of the 001 competition. Registration ID #470 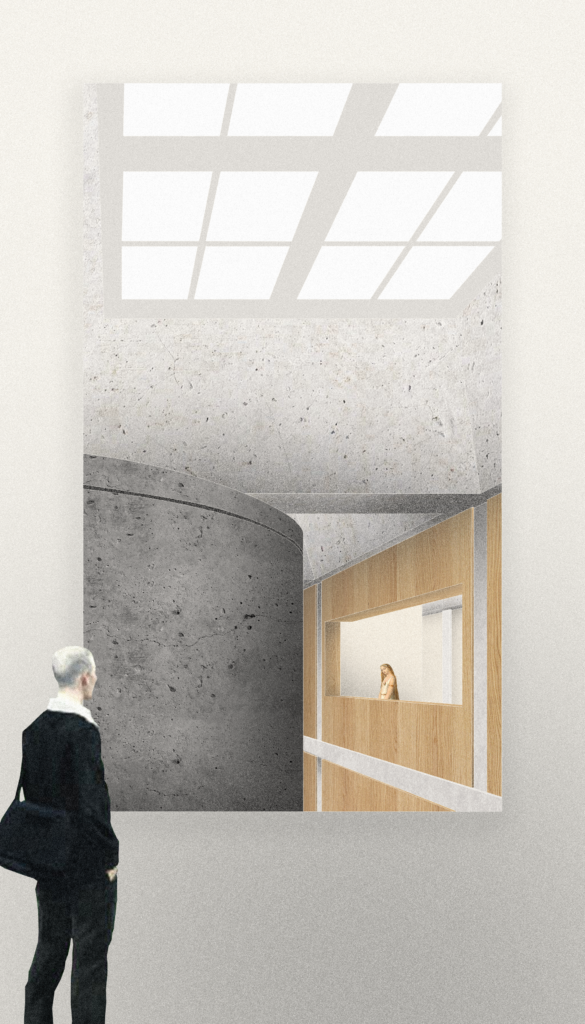 The concept of the image was inspired by the building's abundance of small intimate spaces for viewing art. To Louis, it was most important for the art to take center stage using light to do so. So, I wanted to focus on an interior space like this. Another element of the concept is making the image appear to be a painting on display in the building.

I first used rhino to make a model of just the central atrium space since it's what I wanted to focus on in some way. I used images of the construction drawings I found online to do this. The view for the final image is through the window on the top floor, next to the stair entrance. From here you could see to the other galleries, the stairs and the skylights.

I took the opportunity to practice a new style - collage - and took a more artistic approach. I used Photoshop to create the image after exporting linework from rhino. The materials are done using layer masks and shadows using a soft brush. I also experimented with grain, adding varying amounts to the shadows and overall image.

Next were some adjustments. I used a very low density warm-colour filter and made levels adjustments to the materials and cutouts. This was just to combat the very cool tone of the images I used for materials as well as mimic the warm natural sunlight I saw in images of the building.

The last stage was the cutouts, the woman in the far right a cutout from a painting on display (or at least in inventory) at the Art Center. The cutouts follow the same eye line to connect them visually, and I also think the man appears to be drawn into the painting by the woman's gaze.